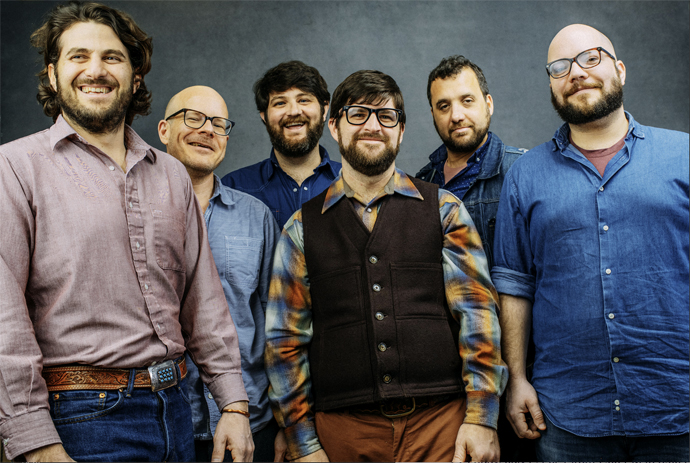 “There has to be at least one band in the country that reveres the past and is unafraid about dragging it into the future. Mark down the Revelers as that band, musicians who aren’t afraid of mixing up accordion, fiddles, saxophones and guitars. Sometimes the greasiest gumbo can also be the best, as anyone within earshot of this mess will attest. Bon ton all night long.”

The Revelers, founding members of the Red Stick Ramblers and The Pine Leaf Boys —  “unquestionably the two groups at the vanguard of the Louisiana cultural renaissance” — have joined together to form a Louisiana supergroup which combines swamp-sop, Cajun, country, blues and zydeco into a powerful tonic of roots music that could only come from southwest Louisiana.

As individuals, they are each in high demand having performed and recorded with T-Bone Burnett, Natalie Merchant, Linda Ronstadt, Preston Frank, Walter Mouton, Mamadou Diabate, the Duhks, Cedric Watson, and Tim O’Brien, to name a few. As a group they play with a sense of empathy and depth that can only be fostered after years of making music together. They have all appeared on the 2011 season finale of Anthony Bourdain’s No Reservations, and they also were handpicked by David Simon (producer/creator, The Wire) to be featured musicians for the third and fourth seasons of HBO’s Tremé.

Long-time fans of the Red Stick Ramblers may find themselves very familiar with The Revelers: the powerful singing and songwriting of Chas Justus and Eric Frey, a mix of traditional Cajun and zydeco dance music, some of the swing that was such a strong focus of early RSR, the magical rhythm section chemistry of Glenn Fields and Eric Frey, and impressive musical virtuosity across the board.

Take what you know about the Red Sticks, add into the mix the crooning vocals of Glenn Fields, and the singing/songwriting of Blake Miller (founding member of the Pine Leaf Boys and unarguably the most prolific French songwriter coming out of Louisiana right now, the tightly arranged section of sax-fiddle-accordion, and you’ll start to get The Revelers’ picture.

The depth of this band has only developed from digging deeper into the dancehall traditions of Southwest Louisiana and emerging with an arsenal we call Louisiana Jukebox Music. Music critics are wont to categorize music into clear genre styles, but that’s not really the way folk traditions develop — things are passed around, the lines are blurred — and particularly in a culture as unique as that of SW Louisiana (we won’t use the old gumbo cliché, but you get the idea … ). The Revelers have embraced that musical truth in a way few bands have — the lines between traditional and original, Cajun, country, zydeco, swamp-pop, and the blues, are blurred, and wide-ranging styles are honed into an extremely cohesive performance.

The genre of swamp pop may bear some explanation. Little-known outside of Louisiana (but still quite popular in the region) it’s a music that’s nearly confined to the archives of the 50s and 60s, save for a handful of bands today. In short, swamp pop is Southwest Louisiana’s answer to the R&B and rock ’n roll that came out of New Orleans, Memphis and Detroit in the 50s. When that unstoppable sound reached Cajun and zydeco musicians, they caught the bug and played their own versions the only way they knew how — sometimes in French, and traded in their fiddles and accordions for horns and electric guitars. It’s a perfect example of how everything that comes from Acadiana is dripping with its own unique culture.

Equally at home on a festival main stage, a late night dance party, or a performing arts hall, the Revelers have taken their mission coast to coast in the U.S. and around the world from Ireland to Denmark, to their own Black Pot Festival in Lafayette, Louisiana. The Black Pot festival is a celebration of the culture of food, music, and dance that’s still thriving in Acadiana, along with the Revelers’ ties to the wider roots music community. Attracting a who’s who of regional Louisiana dance bands along with folk, bluegrass, Tex-mex, gospel, songwriters, and old-time from across North America, it’s the annual culmination of the party that the band brings with them to every stage they play on.