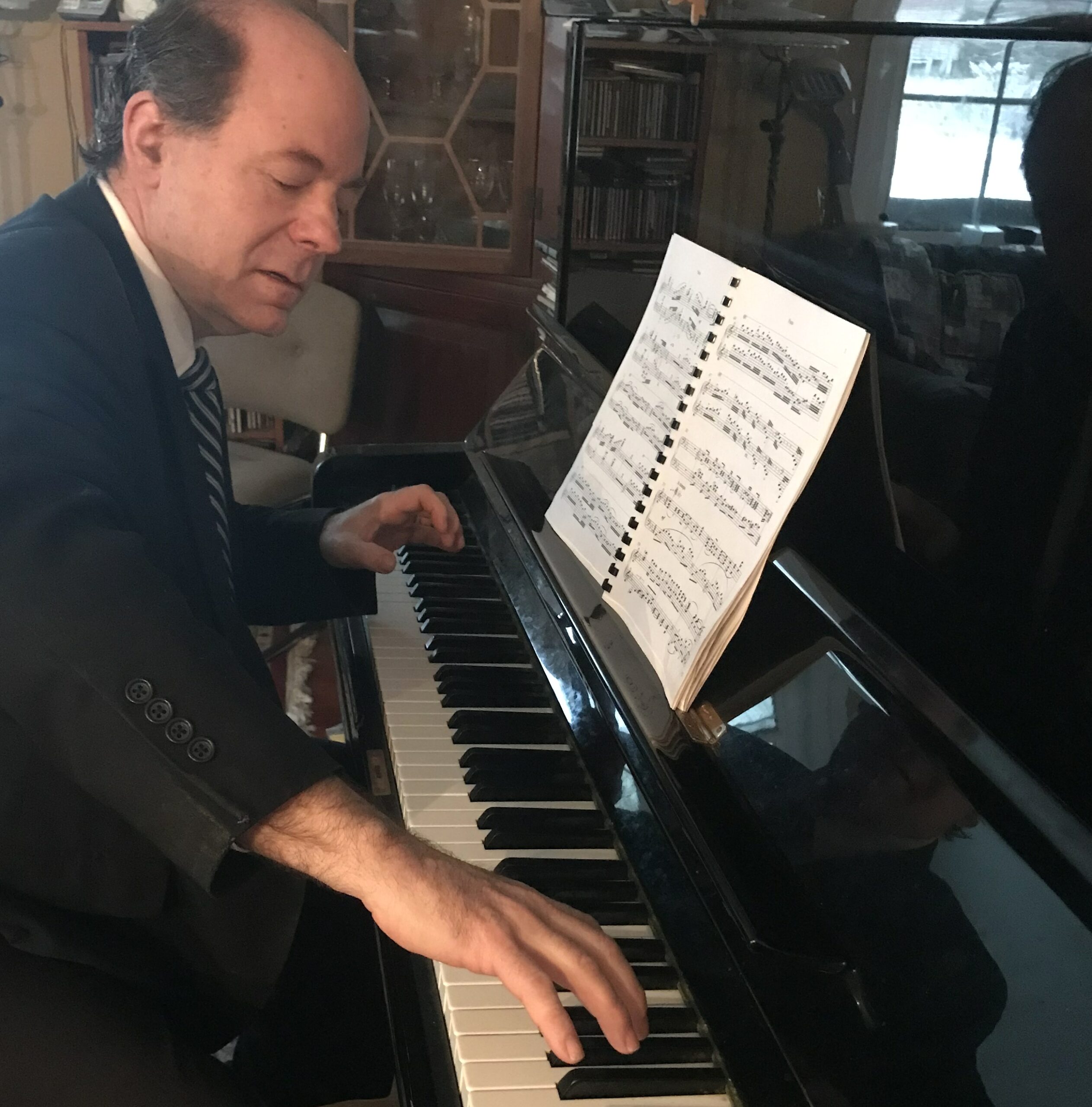 Bennington, VT — On Sunday, May 22, at 4:00 p.m. Sage City Symphony will present a Spring Concert and Silent Auction at Greenwall Auditorium in the VAPA Building at Bennington College. Admission is free and open to all.

The program will feature Concerto for Piano and Orchestra, by Michael Gallagher, with the composer on piano; Symphony No. 3 in F major, Op. 90, by Johannes Brahms; and The Lark Ascending, by Ralph Vaughan Williams, featuring symphony concertmaster Kaori Washiyama.

A Silent Auction featuring a wide array of arts, crafts, jewelry, deluxe gift baskets, gift certificates, and many more intriguing items will begin before the performance and conclude at the end of intermission. The auction is a much-needed fund-raiser for the nonprofit Sage City Symphony, which, like all live music groups, has been hit hard by pandemic restrictions for the past two years.

Covid Protocols: All current and evolving guidelines issued by the CDC, the State of Vermont, and Bennington College will be followed. Face masks and social distancing will be required (“pod” seating permitted), and proof of vaccination and booster with ID will be required at the door. In the event of a resurgence of Covid infection rates, postponement or cancellation of this concert will be posted on the symphony’s website at www.SageCitySymphony.org.

In addition to serving on Sage City Symphony’s board of directors, composer and pianist Michael Gallagher has played viola, trumpet, trombone, and wind machine and even performed as a vocal soloist in a Mozart aria with the symphony. In 2005 the orchestra performed the world premier of his composition “Glacier,” which depicts scenes of the National Parks experienced during a transcontinental bicycle trip he took in 1988. His other compositions include “Cincinnati Suite” for woodwind quintet, “The Spirit of Adventure,” and a trombone concerto he performed as soloist with the Shaker Symphony in Ohio that was such a success that a repeat performance was commissioned by the Chagrin Falls (Ohio) Studio Orchestra.

Notwithstanding his bachelor’s degree in biology and chemistry from Oberlin College, PhD in molecular genetics, biochemistry, and microbiology, and career as a scientist, Gallagher’s love of classical music has followed him his whole life – ever since he was inspired in high school by a concert that featured Horacio Gutiérrez performing Rachmaninov’s Piano Concerto No. 3. In 2001 he decided to change careers and move to the New York-Vermont border and become a full-time composer and farmer, opening a pumpkin stand and planting blueberry bushes and building a studio in a 150-year-old barn. He pursued a bachelor’s degree in music in Skidmore College’s University Without Walls, took lessons in viola and voice, and studied composition with Michael Finckel at Bennington College, which led to the performance of “Glacier” in 2005 by Sage City Symphony.

In-between writing Mass settings and choral anthems as music director at Christ Our Savior Parish in Manchester, VT – where he has been the organist and choir director for 17 years – and taking viola and voice lessons, Gallagher began composing his Concerto for Piano and Orchestra in 2009 and completed it during the Covid pandemic. Even as he was lamenting the fact that it would likely never be performed during his lifetime, an opportunity arose to premiere the piece at Sage City Symphony’s May concert.

Violinist Kaori Washiyama, an instructor in violin, viola, and chamber music at Bennington College since 2005, was trained at the Kyoto City University of Art and Music in her native Japan and pursued further studies at the Accademia Nazionale di Santa Cecilia in Rome and the Accademia Musicale Chigiana in Siena, Italy. In addition to numerous other honors, she is a first-prize winner of the Rodolfo Lipizer Violin Competition and a recipient of the prestigious Rode Award in Italy. She is the founding director of a well-established concert series bearing her name, the Kaori Washiyama Chamber Music Series, which presents musical events annually throughout Japan; she has been honored for these achievements with the Kyoto Music Award, the Tohdo Music Award, the Kyoto Prefecture Cultural Award, and the Baroque Saar Award. She is a core member of In the Music Room, which performs throughout southern California. Other recent American performances, including concert appearances with her partner, Daniel Shulman, have taken place in Boston, New York, San Francisco, and elsewhere. Recently she has performed numerous solo violin recitals and chamber music concerts throughout Japan and Italy. She has served as concertmaster of the Kyoto Chamber Orchestra, the Mozart Kammer Orchestra-Osaka, and, since 2011, Sage City Symphony.

Led by music director Michael Finckel for the past 25+ years, Sage City Symphony was founded in 1972 as a community and college orchestra with close ties to Bennington College. In addition to performing traditional classical repertoire as well as contemporary music, the symphony commissions and premieres new pieces each year. The symphony attracts a high caliber of dedicated amateur and professional musicians who travel from throughout Vermont, New York, and Massachusetts for weekly rehearsals during the concert season. Auditions are not required, and academic credit is available for Bennington College students who participate. Information about joining the symphony, as well as Covid protocols observed at rehearsals and concerts, is available at www.SageCitySymphony.org.

Sage City Symphony is a registered federal non-profit organization in the State of Vermont that relies entirely on generous donations, gifts in kind, grants, and volunteer services from individuals, local foundations, businesses, and sponsors. Donations are gratefully received by mail at Sage City Symphony, PO Box 547, Shaftsbury, VT 05262 or online via www.SageCitySymphony.org. Concerts are always free and open to all.