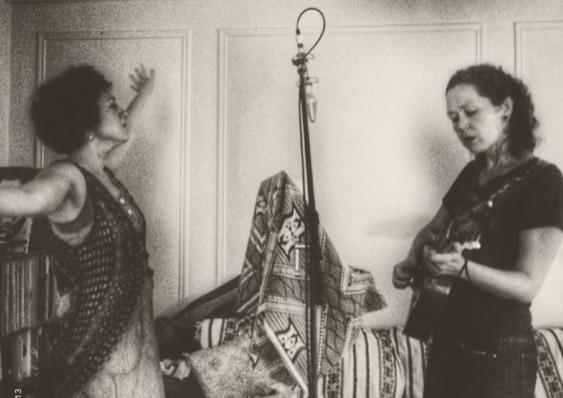 TapRoot Sessions produces concerts featuring traditional music. In 2022 we are seeking to highlight the contribution of women to the traditional music scene with our Women in Roots series providing performance opportunities for women artists, and inspiring future generations of girls and women to participate and lead in the folk community.

Mamie and Tamar’s show will feature a variety of genres  including early country, blues, early and New Orleans jazz, some Appalachian folk, and originals. From Delmore Brothers and Carter Family to Sister Rosetta Tharpe and James P. Johnson, they’ll play songs of love, sorrow, and resilience – the human fate. The duo have been making music together for over 10 years, and released a self titled 7’ on Jalopy Records. Coming up in New York folk and American roots music scenes, both have had their own trajectories and intermittently played as a duo at folk and Americana festivals and gigs.
Mamie Minch is a longtime staple of New York’s acoustic blues scene. Listening to her sing and play is like unpacking a time capsule of American music that’s been stored in her 1930’s National steel guitar for decades and filtered with a modern femme sensitivity.  Mamie writes and performs songs and ballads that bridge between herstorical record and contemporary city life, and especially loves including material from women musicians through time. She is also one half of Brooklyn Lutherie, the city’s only woman owned and run instrument repair shop.
Tamar Korn has been a full-time New York-based vocalist for almost two decades, playing a repertoire steeped in traditional New Orleans and early jazz, western swing, and American roots music, dabbling also in Yiddish songs. Her first bands were the Late Treasures of the Sea and the Cangelosi Cards, she now leads A Kornucopia, plays in the Brain Cloud, has a duo with Mamie Minch, and is an extended member of Baby Soda Jazz Band, and The Grand Street Stompers. As well, Tamar plays occasionally with instrumentalists including violinist Mark O’Connor, Irish folklorist and tenor banjo and bouzouki player Mick Moloney, and stride and ragtime pianist Terry Waldo. She is known for her love of singing songs both lyrically as well as “instrumentally” playing her voice, whether it be as a muted horn, fiddle, drum, or some unnamable wordless sound to add orchestral elements to the music.
This concert is supported by the Massachusetts Cultural Council through grants from the local cultural councils of Alford Egremont, Great Barrington, Lee, Monterey, Mt. Washington, New Marlborough, Otis, Richmond, Sandisfield, Sheffield, and Tyringham Local Cultural Councils. TapRoot Sessions events are Sponsored by Big Elm Brewing.