Demand an end to US complicity in Israeli apartheid 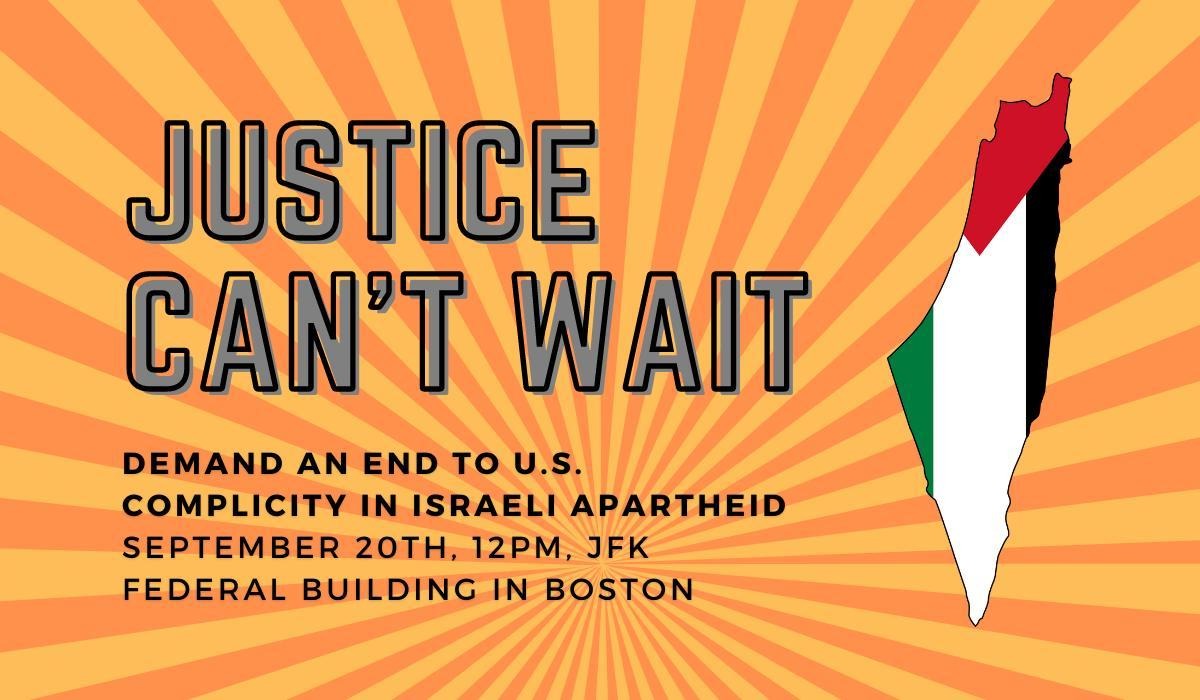 On September 20th, at 12PM, Palestinian organizers and their allies will be gathering for a press conference and rally to deliver a Palestine solidarity letter that has received over 1,200 signatures from Massachusetts residents and organizations. The event has been organized by Palestinian activists in Massachusetts as a response to a call from youth movements in Palestine. The event starts at 12PM, and the speaking program will last roughly 30 minutes. Speakers will include Palestinian academics and community organizers, a volunteer from Senators Markey and Warren’s campaigns. Facebook event linked here.

Spokespeople will be available between 11:30AM and 1PM for interviews before and after the event, and you can contact Lea Kayali for information beforehand.

Organizations in Massachusetts who signed the letter:

In the wake of mass demonstrations, a group of Palestinian organizers and their allies came together to concretize the call to action coming out of Palestine. The group drafted a public sign-on letter, directed to Massachusetts elected officials to take immediate action to cut US complicity with Israel’s colonial, apartheid regime. The letter urges lawmakers to support the Boycott, Divestment, and Sanctions movement, and to end all aid to Israel, among other things. “It is in blatant disregard of Palestinian life” we write, “to reward the brutality of the Israeli military with surplus funds as it kills Palestinian civilians with impunity. Instead, we should be devoting tax payer dollars to building up communities of color at home and abroad.” You can read the letter in its entirety here. The letter received over a thousand signatures within weeks, and after four months of inaction by the Massachusetts Congressional Delegation, organizers have decided to formally deliver the letter in person.

Reality on the Ground

This summer we witnessed unprecedented global resistance to Israeli war crimes and the colonization of Palestine. In May of this year, over 200 people, including more than 60 children, have been murdered by an Israeli bombing campaign. Over 2,000 more have been seriously wounded. Horrific stories have emerged from Gaza of entire families being wiped out, and children enduring lifetimes of trauma. This is routine terror for Palestinians in Gaza. In response to this onslaught of colonial violence, Palestinians – united – rose up. Protests erupted throughout all of historic Palestine and the global diaspora.

In the months that followed the catastrophe, Israeli forces continued to terrorize indigenous Palestinian communities. Among the horrors were mass arrests of Palestinian activists who live in Israel, the continued threat of dispossession for residents of Jerusalem neighborhoods, the murder of Palestinian children, and the imprisonment of Palestinians in the West Bank, including Anhar al-Deek, a pregnant woman who, until recently, was incarcerated just weeks before her due date. This week, Israeli brutality has made headlines as the occupation forces beat a political prisoner within inches of his life.

Solidarity in the US

Protestors took to the streets to hold the US government accountable for their support of Israeli war crimes. In Boston, thousands of people turned out to protests in Copley Square, marching to the Israeli embassy, and calling upon their leaders to end support for Israel.