(Front, left to right) Actors Sarah B. Denison and Ria Nez, and (back) Jasmine Rochelle Goodspeed, in WAM Theatre’s production of KAMLOOPA; photo by David Dashiell.

Playwright Kim Senklip Harvey’s script begins with the stage directions “Time. All.” In WAM’s first live production since the pandemic began, those words have a broad impact.

Set in modern times in British Columbia, the story begins with the voice of a female elder speaking a tribal language that is neither explained nor translated in the program. Who is she? Is she telling a story? This sets a mysterious tone while subtly calling out the difference between the majority of the audience and the characters of the play: If you don’t understand this language, you are the other. The story then follows the journey of two Indigenous sisters who, after a wild night of partying, find that they’ve invited another woman into their Vancouver apartment. The woman, known throughout most of the play as Indian Friend Number 1 (played by Jasmine Rochelle Goodspeed), promises to give younger sister Mikaya (Ria Nez) an education in How to Be a Real Indian.

Mikaya, a depressed student, readily absorbs all that Indian Friend Number 1 has to offer, though much of her information seems to come from the internet. After days of flopping on the couch, watching Disney’s Pocahontas online, ignoring her schoolwork, and cringing from an unexplained pain in her arm, Mikaya is desperate to find meaning in her life. Older sister Kilawna (Sarah B. Denison) is the more serious of the two, going off to work each day and coming home tired in what feels like an endless cycle of entering the apartment, putting down her purse and keys, and taking off her shoes, only to reverse the process on her way out the door. Kilawna tires of Mikaya’s messes in their apartment—which grow more chaotic and disturbing throughout the first act—and refutes the notion that Mikaya exploring her ancestry will lead her to self-understanding. Nevertheless, both sisters tell stories about their interaction with white people in the academic and business worlds that show the systemic racism they endure.

Eventually, Indian Friend Number 1 proposes that Kilawna drive them to Kamloopa, a huge annual powwow in Kamloops, B.C. Kilawna resists but has a sudden and nearly inexplicable change of heart—perhaps because she thinks they’ll see how ridiculous they seem? Or because she feels a tug toward her ancestry as well? The second act finds the three women on the road to Kamloopa, with all the singing and fighting that the best of road trips inspire, and at last entering the gates of the powwow. Their journey speaks to the importance of connections: those among women, sisters, and ancestors. Without knowing where we came from, we can’t understand ourselves, particularly when we’re too busy operating within another culture’s systems in order to stay alive.

The play takes the characters through several moments of comedy followed swiftly by drama and back to comedy again, and the actors handle the ups and downs quite well. All three women embody the personalities of their characters: Denison stays tightly wound as the responsible and overworked Kilawna, Nez offers plenty of laughs and innocent charm as Mikaya, and Goodspeed makes a likable and charismatic trickster who’s given some of the best lines of the play. At times, the action stalls as the scenes change and the actors are incorporated into the transition, moving props and set elements themselves, which is interesting for a few seconds but then has the undesired effect of reminding the audience that they’re sitting in a theater watching a play. And this is unfortunate, because the world of Kamloopa is one we would prefer to stay in until the end. And in a couple of scenes, Kilawna is left stranded without lines or direction for uncomfortably long periods while Mikaya and Indian Friend Number 1 dominate the stage and scene. However, at other times, the pacing (as well as use of lighting) is superb, such as when the sisters shift from partying at home to clubbing and then dealing with the fallout the next morning.

The intimate Elayne P. Bernstein Theatre is a wonderful venue for this play. With spare sets and close proximity to the stage, we’re invited into the innermost lives and private discussions that these characters would never share with the outside world. Each audience member must show proof of identity and COVID-19 vaccination or a recent negative test to enter, and no refreshments are served at intermission. This is a small price to pay for the opportunity of seeing live theater again. If you can’t make the live version, the show will be streamed in the U.S. November 1–7. 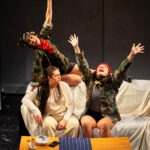 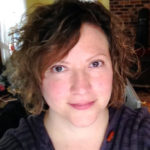