I’ve eaten mostly vegan for the past eight years, and vegetarian for more than twenty-five. These days, I don’t crave meat- or dairy-replacement products in the same way as I did when I first went veg, but I do enjoy trying all the new plant-based products that have come to market, like coconut- and cashew-based cheeses that are dead ringers for the real thing, and veggie burgers that ooze red juices and produce a satisfying sizzle on the grill. So Vegg, a plant-based egg substitute, immediately caught my eye.

Editor’s Note: This post contains affiliate links and reviews of items supplied to the Greylock Glass at no cost in return for an honest, unbiased review. See our Reviews & Editorial Revenue Policy.

We rarely use eggs in my household, simply because I’ve found suitable replacements over the years. Flax and chia “eggs” (ground flaxseed or chia seeds combined with water) work perfectly in most baking applications. Aquafaba, the liquid brine from a can of chickpeas, can be whipped in mayonnaise, mousse, and cake frosting. And I experienced a near epiphany when, on a trip to Seville, I ate an eggless quiche made with chickpea flour at a vegan restaurant—a rarity in Spain, which, despite its generally healthier food habits, still has a meat-heavy cuisine.

So how does Vegg—100 percent plant based, cholesterol-free, sugar-free, low-fat or fat-free, and kosher—stack up? I was given three products to try.

Vegg Power Scramble, which is meant to mimic scrambled eggs, is soy based and labeled as a good source of iron (3 mg, or 15 percent of your daily requirement) and high in B12 (1.1mcg; this is a vitamin that can be difficult for strict vegans to get enough of). To make the equivalent of two scrambled eggs, the package directions call for 4 tablespoons whisked together with ½ cup water, then microwaved, flipped, and microwaved again.

I followed the package instructions exactly, and the results were less than stellar; it came out dry and flaky, rather than moist and tender. I reached back out to the company to see if I was doing something wrong, and they recommended adding more water and a bit of oil. This improved the texture, but it still came out crusty along the edges and needed a lot of salt and pepper for flavoring.

Vegg Vegan Egg Yolk is the most unusual product of the bunch. Its GMO-free, soy-free, and carbohydrate-free formula creates runny “egg yolks” good for topping your scramble, for dipping, or for use in yolk-starring recipes like Hollandaise. The package instructions call for blending the mix with water in a blender, and note that you may be better off making a double batch at a time, to ensure that the mixture incorporates properly.

I prepared a double batch according to the package instructions, but found that the mixture didn’t fully incorporate in the blender; I still had some clumps clinging to the bottom that I had to hand-whisk. The texture wasn’t quite as runny as a real egg, and had a certain stickiness in the mouth. This might sound odd, but it was also overly eggy, thanks to the inclusion of kala namak, or Indian black salt, which has a distinctive sulfuric flavor. I use this salt in my own tofu scrambles and chickpea omelets, and a little goes a long way. Vegg Vegan Egg Yolk was much more successful in French toast, where its stickiness helps it adhere to the bread far better than a flax or chia “egg” can, and produces a decent crust in the skillet.

Vegg Uncaged Baking Mix was my favorite of the three. If you’ve been vegan for any length of time, you probably make your own flax “eggs.” Instead of flax, Vegg, which has a respectable amount of vitamin A (333 mcg), relies on pea protein as its base. Its eggy flavor comes from the combination of dried yeast and kala namak, and is more nuanced than the Egg York. The mix is combined with a small amount of sugar and water, and added to baked recipes the same way as you would add a chicken egg.

In brownies, cake, and muffins, Vegg Uncaged Baking Mix performed like a champ. My treats were tender, appropriately fluffy or fudgy, and had no problems with binding or rising. I haven’t tried it in cookies or recipes like popovers, where it’s difficult to substitute for dairy eggs, but those are next on my list.

Vegg plant-based egg substitutes run $9.99 per package. Depending on the product, they can be a good value; the baking mix, for example, will last through dozens of cookies, brownies, or cakes. I’d try them again, though this time I’ll use the recipes in the Vegg Cookbook, which are tailor-made for the product and more likely to produce good results than substituting the egg in your average New York Times Cooking recipe. 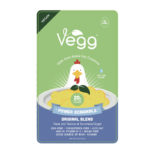 The Store at Five Corners Cafe and Market to Open

The Store at Five Corners opens this week, with a new menu and a rejuvenated vibe.