The Winter Brew Review is an occasionally published series that seeks to uncover the regional frothy beverages that are exactly what you’re in the mood for when the mercury dips below tee-shirt-and-a-flannel, and anyone trying to push a Pilsner on you is askin’ to get bipped on the forehead.

Some brews that make the cut are passable substitutes for 10W-40 in a pinch. Others would buy you forgiveness if a dinner party host says, “bring something for dessert.” All of them, due to their profound satisfyingness can produce papers proving their diplomatic, carbohydratic, calorofantastic immunity. I mean, why would they put holes east of the buckle if they didn’t expect you to use ’em, right?

The series has been on hiatus due to the unseasonably warm weather. We couldn’t take the chance of publishing installments extolling the virtues of beer viscosity and you all just raising your eyebrows with an, “Uh, I’m still pretty good with this IPA, Brewsy, thanks…” But we now throw open the spigot again, dear imbibing readers, and invite you to rejoin us on our Winter Brew Review, 2019!

The joint had been shuttered for more than three months. As anticipation built throughout Autumn, people began to wonder what might justify so many weekends sans suds at Harvest Brewing in the traditional season of…well, harvest. Owner Sean Dunleavy had promised upgrades, both to form and function, a tweaked food menu, and expanded beer offerings. I found my way to South Street in Bennington on a chilly evening during one of Harvest’s “soft openings.”

Except for the fact that the entrance is right there on the main drag, the minimal signage gives you the sense you’re walking into a well-guarded secret. Pushing past the pinball and retro video games into the welcome heat, I couldn’t suppress a wry grin as Robert Plant warned me the levee was going to break. I had little doubt that Led Zeppelin IV was somewhere in the hundreds of of vinyl albums securely shelved behind the bar. The walls now serve as gallery for local artists, but that evening, prints of Art Deco advertisements for ales and absinthe increased the speakeasy vibe.

As speakeasys go, though, it hosted a pretty casual crowd; no shiftless thugs, flapper debutantes on the loose, nor high-rolling tycoons in sight. This is a neighborhood pub, and the patrons shared a spirit of good-natured excitement to be among the first to immerse themselves in the new look and feel of Harvest. The current of community — generated by the families with young kids, lovers trying to out-coy each other, and friends of the staff present for moral support — seemed to be the energy that kept a spare but comfy space from taking on any hint of a rowdy beer hall. Though with live music now featured weekends, maybe a hint of rowdy will give the beers on tap an extra something.

If you have to give your beers a little extra something, like on the side…like of substance, vegetarian and vegan specialties are available — everything from chili to chickpea salad. And if you must pair your brew with some mooo, Vermont-based McKenzie uncured natural-casing franks are on the permanent menu. They go great with jumbo pretzels with beer cheese, too.

Would a more raucous environment have added or taken away from the features of Harvest Brewing’s Smoked Porter that evening? Hard to say. Ours may be the only beer review paradigm that takes venue into account, but we don’t think you can separate a brew from the ambience of its birthplace—not when you’re sitting just a few dozen feet from the tank where it came into the world.

(Note 2: my first draft of this was in early December — if your experiences differ from mine, either because…well, you’re you, or because the batch you sampled truly varied, please do leave a comment below. We want people to weigh in with their experiences.)

The look of this limited run Porter was immediately promising, though the head could maybe have exhibited stronger signs of life. It rose well upon pour, but wasted little time in going back to sleep. The color, however, was an impressive, like saturated deep dark brown corduroy with a thin, thin strain of mahogany hue when held up to the light.

Initially, the scent of this brew was as coy as the aforementioned sweethearts. Indistinct whiffs made their way to my curious olfactory receptors, but failed to activate any strong responses. I wrapped my hands around my glass and waited a bit. I didn’t have my thermometer with me (a mistake I won’t repeat), but I guessed that my pint was a few degrees below the 50–52ºF that really releases the aroma and at which I enjoy a Porter.

Once I’d gotten the object of my desire a little more comfortable, it loosened up a bit, and some detectable scents began to escape. Chocolate. Barbecue. Earth covered dandelion roots. And then—there she was: barley.

All these greeted my sinuses as I lifted the glass and whispered sweet nothings to the fading foam and took a sip. Now, not reading the brewmaster’s description, whenever possible is key. At least until you’ve developed a first impression. First of all, once you say the word “nutty,” about a beer before I’ve had a chance to sample it, I have a hard time keeping the suggestion out of my head without some work. So it was a relief to roll the liquid around in my mouth for a bit, let it cascade down past my tonsils, smack my lips, and breathe, “cherrrry….”

Cherry was, indeed, a highlighted tone in the Harvest’s profile of the beer. The smoked malts instilled a complexity that contained just enough tension between the richly developed sugars and the fruity, tangy strains. In total, a very balanced Porter taste—not shy, but not overly aggressive, either. Funny, though, I waited to taste the chocolate that I’d smelled earlier, and that flavor never came. It’s absence turned out to be a relief, because it would have been like being at a party with one of your good friends who just didn’t quite fit in with that crowd.

I was very pleased with the texture. After my disappointment in the head, I braced myself for the “Before” picture in the Soloflex ads. A click over medium-bodied, the density presented itself with a general silkiness that hid just the right amount of grittiness. Best of all, you felt this brew going down, and your mouth was treated to a slight after-froth I wished I could take home with me.

Overall, the Smoked Porter turned out to be an easily drinkable beer, and would be a very accessible introductory candidate for anyone used to American ‘mersh brews who’s looking to explore something that does a better job nourishing the spirit. And at a reasonable 6% alcohol, if it takes two (or even three over the course of an evening) to make up your mind solidly, you’ll be able to recall this tasty beverage and describe it to friends the next day.

We rate this this Winter Brew “Very Good,” and do hereby induct it into our Winter Brew Approved Review. 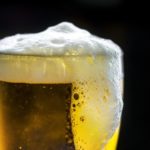 Which Minorities Should YOU Be Persecuting In 2019?