Today is Tuesday, January 16, 2018, and you’re listening to episode 62 of the Top Left Corner. I’m your host, Jay Velazquez, and, as always, I thank you for tuning in.

We’re coming up this week on the first anniversary of the Women’s March, the largest single-day protest in U.S. history, with half a million attendees showing up for the flagship event in Washington D.C., approximately 4 million participating in events around the country, and well over 5 million demonstrators world-wide.

Although I haven’t talked much about it, I was fortunate, more than fortunate actually, to attend the Women’s March on Washington. At the last minute Meghan Whilden, Executive Director of the Osher Lifelong Learning Institute at Berkshire Community College, contacted me to let me know about an empty seat on one of several busses heading to the Capitol from Western Massachusetts. She wanted to send me down as one of the Berkshires’ own journalists on location at one of the most profound and powerful experiences on American soil of the 21st Century. My bus left from Northampton, Mass about 1:30 a.m. packed primarily with women from the Pioneer Valley, but also a good share of Berkshire residents. The buses leaving out of Pittsfield had all left earlier the evening before. 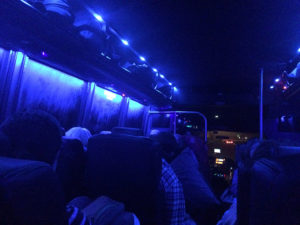 Our bus arrived and parked in the lot of a stadium outside of the Capitol, and, keeping close to my Berkshires contingent, I made my way toward the National Mall, interviewing people along the way. Long before I saw the columns of the Supreme Court or any of the monuments, I knew that I’d been captured by history and marked in a way that would be almost painful for its permanence.

I reported via Facebook LIVE video and through live audio broadcasts using the Mixlr Internet radio service. I posted photos and text updates until first the cellular service in D.C. got completely clogged, or intentionally disabled—we never found out— and then eventually my phone’s battery ran dry, and I had no way to charge it without finding my way through a rolling pink sea of determination.

On the trip back to Western Mass, I tried to piece together some way to tell a story that was weightier and more expansive than I’d ever been tasked to convey. Harder still was knowing what to do with the strange distance I felt between myself as a man and a reporter at the scene and the women who were returning as victorious participants. There were so many women who’d attended not just the March on Washington, but also the sister events in the Berkshires and beyond, who had their stories and experiences to share as women with other women. Who was I to show up at their campfire and ask to be passed the talking stick? And with such really excellent coverage by so many distinguished national journalists, I couldn’t see what contribution I might make. 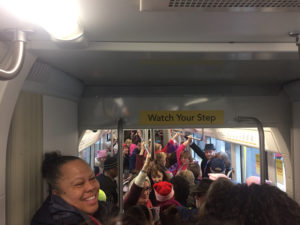 I spent a good amount of time on both the way down and the way back talking with Emily Cutts, staff writer for the Daily Hampshire Gazette. I meant to ask her what it felt like to be a female journalist covering the story, and whether she felt she needed to try to keep a level of professional detachment from the events. I don’t know how any reporter, man or woman, could have kept their heart behind a fence, to be honest.

But I never got to ask her. The bus stopped moving about 40 minutes south of Northampton and wouldn’t budge again. In a flurry of calls to family and frenzied tapping on Uber, the women and men who shared such powerful solidarity for the last 24 hours made their separate ways out into the pre-dawn darkness and frost. My lot, and that of my traveling companion, was looking more and more dire as Uber drivers started running out, and I couldn’t get my phone to install the damn app anyway. In an act of selflessness and generosity, charity really at that hour of the morning, my newly met colleague gave up her seat so that we could make it back to Northampton. She ended up waiting over an hour in the cold until a friend was able to get there and shuttle her back to Paradise City. Thank you. Thank you again, Emily Cutts. Your strength, exhibited through kindness and self-sacrifice was so…feminine. 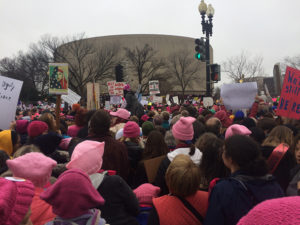 It didn’t take me long, sitting starting at the empty white screen of my computer, to realize that what Megan Whilden had done, intended or not, was not to dispatch me to the nation’s capitol to go get that story, but to send me there so that the devastating 24-hour transformation I underwent would inform my decisions on what topics I would cover and how I would cover them from that point on. If it seemed to you that the reporting coming out of the Greylock Glass was steeped in estrogen in 2017, well now you know why.

I looked for stories not just about women in the Berkshires, but about how those women, through their own work and lives, reflected the growing realization that America was about to reckon with a women’s movement that was gaining in power, momentum, and political sophistication. The country would begin to come to terms with gender inequities and injustice not because it was convenient at the moment, but because women had decided they were done with gradualism. 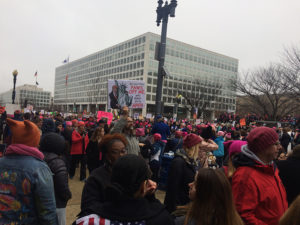 The Greylock Glass reported on many, many women achieving amazing things in education, literature, music, politics, and other areas. When searching for a source to talk to about a subject that wasn’t inherently masculine or feminine, I challenged myself to be sure to contact a woman with equal expertise or credentials if no reason existed not to feature a feminine voice. Finally, just as important to me as including women’s voices in our reporting was committing to give time to stories about issues that may have a veneer of gender neutrality, but which, in fact, affect women disproportionately, and often with strikingly unjust consequences.

What did I learn pursuing this slight editorial tweaking in 2017 was that including women more often in news coverage, as vital actors on the many diverse stages of human experience, as agents of their own fortunes and as agents of change in their communities? I learned that it’s really no professional challenge. It’s just a personal habit. Plenty of men made appearances in our podcasts and in our pages last year, too—when it made sense, in the interest of the informing the audience, to talk with them. But never as the default gender. And while I haven’t analyzed stories and podcasts from 2015 or 2016 to see if last year rectified a gender disparity of which I wasn’t aware, I don’t think I have to at this point. And I don’t think I’m going to have to make any special effort in 2018 to ensure journalistic gender equity. If, as I hope, I’m in a position to hire a reporter this year, I’ll be looking forward to nurturing the habits of awareness in her or in him that took root for me, and for the world, during the first Women’s March on January 21, 2017.

Although I never did come up with a satisfactory way to chronicle my trip to Washington, I did return home with a couple hours-worth of audio interviews. I’ve sifted through those conversations and pulled out a small collection of my favorite quotes. Except for the voice of Kamala Harris at the end, the speakers are going to remain nameless, though some of you will, doubtless, recognize one or two of the women I spoke with. So now, I’d like to share with you, as a small way the Greylock Glass can commemorate that historic demonstration, Ten Minutes of Voices on the Road to the Women’s March on Washington.

PRISM #67: Are you sitting down? We have some big news.

The Cornbread Cafe #7: Charlie Parr and a few others we’ve been keepin’ warm for ya’.