Today is Wednesday December 20, 2017 and you’re listening to Episode #66 of Will Call, our final episode of the show for the year. I’m your host, Jason Velázquez, and I thank you not only for tuning in today, but for being such a fine, fine audience throughout 2017. It has been my treat to share with you news and interviews from the performing arts universe here in the Berkshires. I don’t know about you, but I can’t wait to find out where 2018 will lead us.

I am so pleased to announce that this episode is sponsored by one of the newest supporters of the Greylock Glass, The Spirit Shop of Williamstown, located at 280 Cole Avenue, purveyors of fine wines, a masterfully curated selection of domestic and imported beers, local hard ciders, and a full range of liquors—if you check your cabinet and find your holiday entertaining supplies lacking, a trip to the Spirit Shop, might just be the solution you’re looking for.

We’re joined this episode by Paula Hatch, Executive Director of the Berkshire Bach Society, to talk about this year’s Bach at New Year’s event and to look forward to 2018. 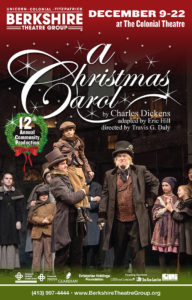 That was a portion of Bach’s Brandenburg Concerto No. 2 in F major, played by the Berkshire Bach Ensemble during their 2016 Bach at New Year’s. All six Brandenburg Concerto’s were performed for last year’s holiday spectacular, the final such with Kennth Cooper as director before his retirement. With me now is Berkshire Bach Society executive director Paula Hatch to describe this 2017 event and to fill us in about what’s known of the 2018 season.

Head on over to http://berkshirebach.org/ for tickets and more information. Well, that’s our show for this week. I’ve been your host, Jason Velazquez, and again, I do thank you for listening today, and throughout 2017. I hope you’ll join me next year for another great season covering the performing arts in the Greylock corridor. Take care!

William Boyce: Symphony No. 1 in B flat Major for oboes and strings.

Purcell: Chacony and Fantasias; Cebell and Fanfare; The Faerie Queen Prelude and Celebration

William Boyce: Symphony No. 1 in B flat Major for oboes and strings.

J.S. Bach: Contrapunctus #9 from The Art of the Fugue.

Mozart-Bach: Five fugues for String Quartet from The Well-Tempered Clavier

The Cornbread Cafe #6: INTERVIEW with Janie Barnett, too many new tracks to list!