Amy Holzapfel Chair, Associate Professor of Theatre at Williams College, moderates a discussion about the politics of participatory performance, and the lessons and practices it can share with democratic assembly in public space. She is joined by panelists, Bryan Doerries, Director, Antigone in Ferguson; Taibi Magar, Director, Underground Railroad Game, Rebecca Schneider, Professor in the Department of Theatre Arts and Performance Studies, Brown University. 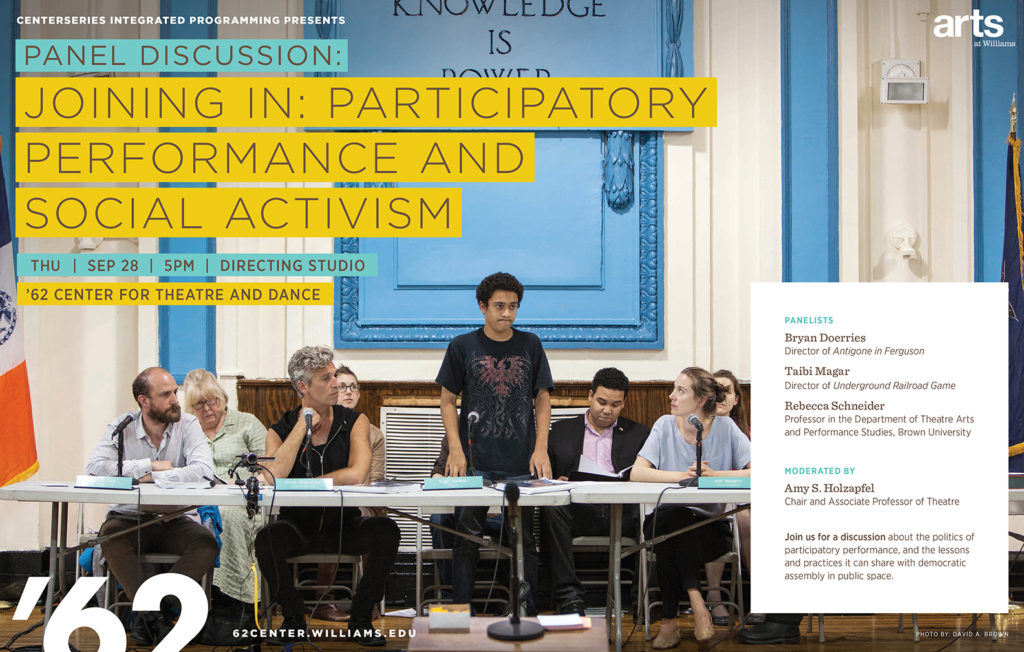 The hook is to connect theatre with the contemporary wave of engaged social activism.

’62 Center for Theatre and Dance

The following information comes from released material provided to the Greylock Glass.

WILLIAMSTOWN, Mass.—The ’62 Center for Theatre and Dance’s CenterSeries is excited to kick-off the 2017/2018 season with a timely production of Antigone in Ferguson, directed by Bryan Doerries and composed by Phil Woodmore. Both compelling theatre and searing social justice project, Antigone in Ferguson is a radical and unlikely staging of Sophocles’s classic tragedy, conceived in response to the 2014 killing of Michael Brown in Ferguson, Missouri. Antigone’s themes of integrity and human folly, set down in the fifth century BCE, resonate through the ages, illuminating the recent clash between public authorities and American citizens as they call for justice in police brutality cases. At the end of the performance there will be a community discussion. There will be one performance only, on Saturday, September 30th, 2017 at 8:00 PM on the ’62 Center’s MainStage, located at 1000 Main Street, in Williamstown, MA. Tickets are $10/$3 students.

A play that speaks to Ferguson’s tragedy and lets the audience speak back. – PBS News Hour

Bryan Doerries, author of “The Theater of War: What Ancient Greek Tragedies Can Teach Us Today,” directs this timely adaptation. Performed by an all-star cast along with a gospel choir featuring police officers, educators, and community members from Ferguson, the play makes an appeal for the timelessness of Sophocles—and the urgency of grappling with his implications in our current political climate.

Bryan Doerries is a Brooklyn-based writer, director and translator, who currently serves as Artistic Director of Theater of War Productions, which uses classic literature to help individuals and communities heal from trauma and loss. During his tenure at Theater of War Productions, the company has presented diverse projects across the country and internationally. Doerries’ book, The Theater of War: What Ancient Greek Tragedies Can Teach Us Today, was published by Alfred A. Knopf in September of 2015, along with a volume of his translations of ancient Greek tragedies, entitled All That You’ve Seen Here is God. His graphic novel, The Odyssey of Sergeant Jack Brennan, an adaptation of Homer’s Odyssey as told by an infantry Marine to his squad, was published by Pantheon in April of 2016. Doerries lectures on his work at cultural venues throughout the world and, in recent years, has taught courses at Princeton University, the Stella Adler Studio of Acting, and the Bard Prison Initiative.

Doerries is a proud graduate of Kenyon College and serves as a board member of the Alliance for Young Artists & Writers and Friends of the Young Writers Workshop. Among his awards, Doerries has received an honorary Doctorate of Humane Letters from Kenyon College, and in March 2017, he was named Public Artist in Residence (PAIR) for the City of New York, a joint appointment with the New York City Department of Veterans’ Services and Department of Cultural Affairs. During this two-year residency, he will bring more than 60 Theater of War Productions projects to diverse communities across all five boroughs.

“Antigone in Ferguson Comes to Baltimore”

“What About Justice? Paul Giamatti and Sonja Sohn star in ‘Antigone in Ferguson’ at Coppin“

Continuing its mission to contextualize arts within scholarly inquiry, the Center presents an impressive body of work that sets student work side-by-side with that of professional artists.  We strive to challenge traditional forms, engage with a larger political dialogue and allow our audiences to explore diverse modes of expression.  Not content merely to present popular work, the Center’s professional performances, workshops and student productions are designed to invite the entire community to engage, debate, and celebrate the experience of both witnessing and creating live art.

TLC #50: Voices for Recovery with NBCC, but first, the news…